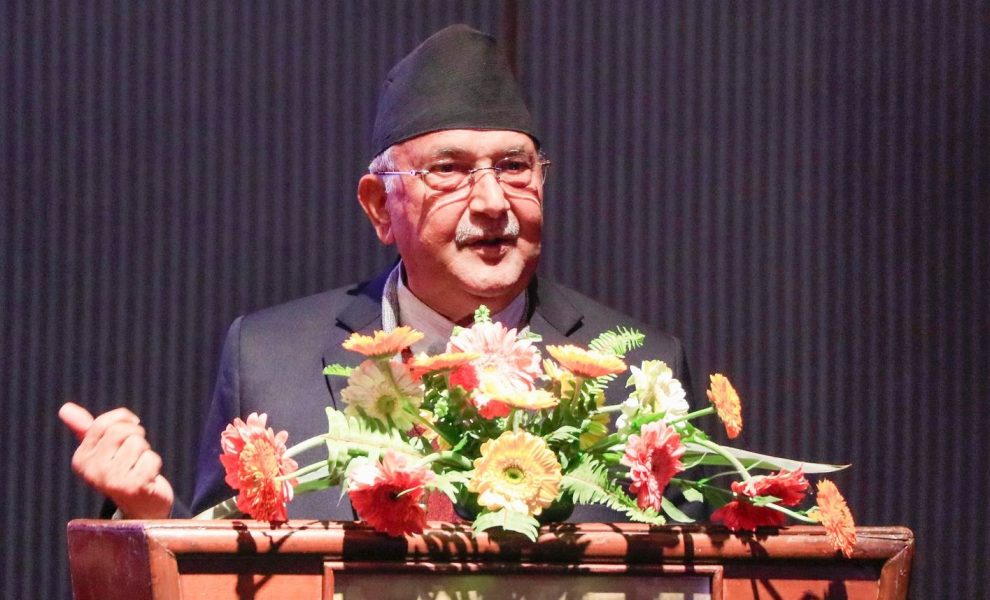 Kathmandu,  Prime Minister KP Sharma Oli has reiterated that he was firm on propelling the national campaign to prosperity despite adversity.

Inaugurating the ‘digital soil mapping’ amidst a programme organized by the Ministry of Agriculture and Livestock Development here Wednesday, PM Oli said he would engage untiringly to materialise the responsibility he took irrespective of position and place.

“There is no point in being nervous over the Supreme Court verdict. As long as we live, we should devote life to good works,” he said, claiming that the government he led made significant achievements in infrastructure and economic development in the past three years. Even the tunnel way is under construction in Nepal, he reminded.

Moreover, the PM said four highways linking East to West of the country were being constructed and the works for the railway were intensified. The government, as the PM claimed, was moving ahead to achieve the double digit economic growth. It has been aimed to achieve SDGs by 2030 and graduate country to the status of developing country by 2022.

The agricultural and livestock products as fish, meat, vegetables and dairy items were increasing. PM Oli argued that although Nepal is self-reliant on cereals, import was increasing due to luxury food habit of Nepalis.

He stressed the need to augment the use of agricultural tools thereby reducing manual labour. “Once the technology is used in agriculture, the investment cost is reduced largely,” PM Oli said, adding that the farmers could now take help from experts on soil quality after the digital soil mapping.

On the occasion, Minister for Agriculture and Livestock Development Padma Kumari Aryal said Nepal is the first country in South Asia to develop national digital soil map. It is a matter of pride, she added.

Many reforms were made in the last three years in agriculture sectors.