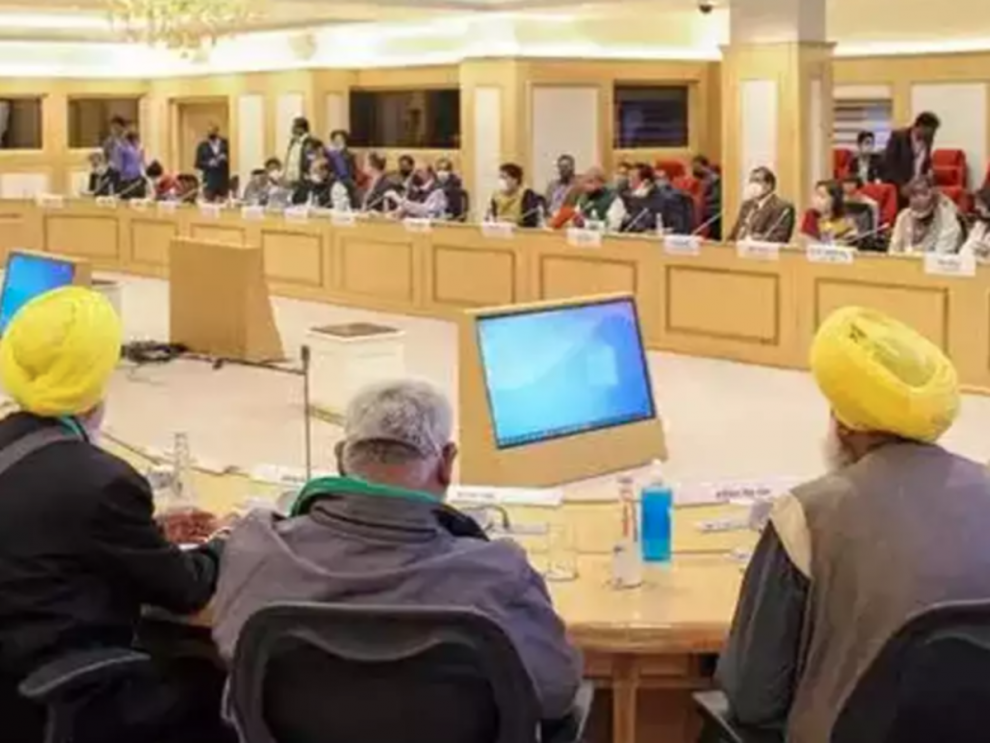 New Delhi, Jan 15 (PTI) Protesting farmer unions stuck to their demand for a complete repeal of three contentious farm laws at their ninth round of talks with three central ministers while the government asked them to be more flexible in their approach and expressed willingness for necessary amendments, as the two sides decided to meet again on January 19.

Farmer leader Joginder Singh Ugrahan told reporters after the meeting that the unions urged the government to repeal the three laws, but the Centre was unwilling to do so. “We decided to meet again on January 19 at 12 pm,” he said. Ugrahan said the union leaders also raised the issue of NIA raids on transporters in Punjab who are supporting farmers’ protests and were providing logistic support for the agitation. At the meeting that lasted for nearly five hours, including a lunch break, farmers unions said they are committed to continuing holding direct talks to resolve the over-one-month-long deadlock over three agri laws, even as a committee has been formed by the Supreme Court to resolve the deadlock.

In his opening remarks, Agriculture Minister Narendra Singh Tomar urged farmer leaders to be flexible in their approach as has been done by the government. Besides Tomar, Railways, Commerce and Food Minister Piyush Goyal and Minister of State for Commerce Som Parkash were part of the government side talking with representatives of around 40 farmer unions at the Vigyan Bhawan here. “Both the government and farmer unions have reaffirmed their commitment to continue with the direct dialogue process,” All India Kisan Sangharsh Coordination Committee member Kavita Kuruganti, who is part of the meeting, said. “In his opening remarks, Tomar ji said you keep saying that the government is adamant and making it an issue of ego, even though we have accepted several demands.

Don’t you think you should be flexible and not stick to one single demand of repealing the laws,” said Baljit Singh Bali of Punjab Kisan Morcha. Farmer leader Darshan Pal said there was a good discussion on all three laws. “There is a possibility of some resolution. We are positive,” he added. Another leader Rakesh Tikait said: “Government has told us that solution should be found through dialogue and not a court. Everyone is of the same views. There is a possibility of some solution.” Thousands of farmers, mainly from Punjab, Haryana and western Uttar Pradesh, are protesting at various border points of Delhi for over a month now against the three laws.

On January 8, the eighth round of meeting had remained inconclusive as the Centre ruled out repealing the three contentious laws claiming nationwide support for the reforms. However, farmer leaders had said that they were ready to fight till death and their ‘ghar waapsi’ would happen only after ‘law waapsi’.

In the sixth round held on December 30 last year, some common ground was reached on two demands — decriminalisation of stubble-burning and continuation of power subsidies. Enacted in September 2020, the government has presented these laws as major farm reforms aimed at increasing farmers’ income, but the protesting farmers have raised concerns that these legislations would weaken the minimum support price (MSP) and “mandi” (wholesale market) systems and leave them at the mercy of big corporations.

The government has maintained that these apprehensions are misplaced and has ruled out a repeal of the laws. The Supreme Court on January 11 had stayed the implementation of the three laws till further orders and appointed a four-member panel to resolve the impasse. Bhartiya Kisan Union president Bhupinder Singh Mann, however, on Thursday recused himself from the committee. Shetkari Sanghatana (Maharashtra) president Anil Ghanwat, International Food Policy Research Institute’s Pramod Kumar Joshi and agriculture economist Ashok Gulati are the other three members on the panel.